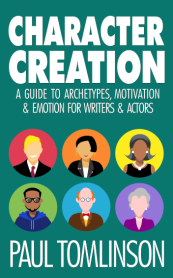 Below are a few resources mentioned in the book, along with a chapter that I decided not to include in the final book.

The ‘character palette’ is a set of six archetypal personality types that I discuss in detail in the book. This chart – included as an appendix in the book – is a summary of the qualities that make up each of the archetypes.

I created a profile form that can be used to keep track of the details you create for a character – it is included as an appendix in the book and there is a PDF version below that you can print out and fill in. If you would like an editable .DOCX version of the form, drop me an e-mail via the ‘Contact’ page — be sure to include your e-mail address so I can send the form on to you.

‘Before You Begin Writing’ aka ‘Finding the Writer Within’

In the first draft of Character Creation this was the first chapter. I showed it to a writer-friend and he hated it, so I moved it to an appendix in the second draft. And then I chickened out and cut it from the third draft completely. Here it is in PDF form — you might find it interesting or you may hate it too.

Before You Begin Writing

This is a list that I include in the book — it is taken from Part 3 of Spinoza’s Ethics with modern dictionary definitions added by me. I’ve included it as a PDF here in case you want to use it for inspiration.

The Emotions – from Spinoza

I mention this briefly in the book and again I’m including it here because you might find it useful as you work on your own characters. This is a single-page ‘model’ based on the 12-step program developed by Alcoholics Anonymous. I use a much more detailed ‘character development arc’ model in Character Creation (see below)